Click on the images below to view the plaques in large format. 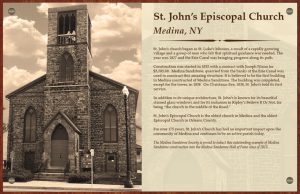 St. John’s church began as St. Luke’s Mission, a result of a rapidly growing village and a group of men who felt that spiritual guidance was needed. The year was 1827 and the Erie Canal was bringing progress along its path. Construction was started in 1832. Medina Sandstone, quarried from the banks of the Erie Canal was used to construct this amazing structure. It is believed to be the first building in Medina constructed of Medina Sandstone. The building was completed, except for the tower, in 1838. It is known for its inclusion in Ripley’s Believe It Or Not, for being “the church in the middle of the Road”. 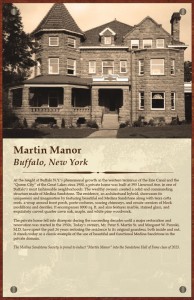 At the height of Buffalo N.Y.’s phenomenal growth as the “Queen City” of the Great Lakes circa 1900, a private home was built in one of Buffalo’s most fashionable neighborhoods. The wealthy owners created a solid and commanding 8,000 sq. ft. structure made of Medina Sandstone. The private home fell into disrepair during the succeeding decades until a major restoration and renovation was started in the 1950s. Today’s owners, Mr. Peter S. Martin and Margaret W. Paroski, M.D. have spent the past 26 years restoring this residence to its original grandeur, both inside and out. 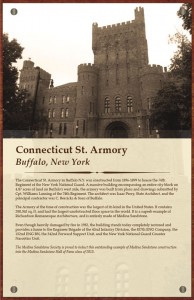 The Connecticut St. Armory in Buffalo N.Y. was constructed from 1896-1899 to house the 74th Regiment of the New York National Guard. A massive building encompassing an entire city block on 4.87 acres of land on Buffalo’s west side, the armory was built from plans and drawings submitted by Cpt. Williams Lansing of the 74th Regiment. The architect was Isaac Perry, State Architect, and the principal contractor was C. Berricks & Sons of Buffalo. The Armory at the time of construction was the largest of its kind in the United States. It contains 280,362 sq. ft. and had the largest unobstructed floor space in the world. It is a superb example of Richardson Romanesque Architecture, and is entirely made of Medina Sandstone. Even though heavily damaged by fire in 1982, the building stands today completely restored and provides a home to Army and National Guard units.

The Catholic community in eastern Orleans County was growing rapidly in the late 1890’s when talk of building a new church was whispered among the parishioners. Father James McCarthy launched the actual construction when he became pastor in 1902. Dedicated on December 24, 1905, the Holley Standard newspaper printed this description: “The new church is a beautiful structure of brown sandstone from our local quarries. It occupies a central and attractive site on the west side of Main street opposite the High school. The main building is 120 feet long from east to west and 34 feet wide. At each corner of the front are battlement towers, and a large stone cross surmounts the peak of the roof. The architecture is dignified, impressive and churchly.” Today the church is 110 years old and that pride is still apparent in this beautifully maintained sandstone church.