The Medina Sandstone Society created the John Ryan School of Historical Excellence to bolster and instill in the minds of Medina’s youth a heightened pride in our local community. To do this they are encouraged, at the high school level, to rise above average in understanding hometown history and heritage. May they appreciate the foundation on which Medina was built and take part in the mortaring of its future through active citizenship.

The name of the school springs from the legend of John Ryan, a hardy pioneer stone mason who traveled hundreds of miles on foot and spent the rest of his life as a builder and quarry operator, using world-famous Medina sandstone. He opened the first commercial Medina sandstone quarry here in 1837. Consider also the fact that Medina was born of Oak Orchard River (offering water power) and the Erie Canal (offering low-cost shipping) and you have the basis for the Medina Story.

The John Ryan School of Historical Excellence adopts a concept developed by the Medina Sandstone Society and the Medina High School History Faculty. The intention is to broaden a knowledge of the village’s history in the minds of community youth, prompting them to show a special civic pride and to exhibit that with their hearts and minds.

The school was founded in 2015 and is organized to offer an enhanced local history curriculum to a select group of “honor level” students. Their school year may offer local text and video material, guest lecturers, organized field trips, research and writing assignments, annual contact with the Sandstone Society and the possibility of an occasional social gathering.

If John Ryan Scholars either stay in or return to their hometown with the feeling that “this is a great place to live, to begin my career, to raise a family”, then one goal of the John Ryan School will have been achieved- pride that encourages young men and woman to become future leaders of Medina.

The students who will be chosen for this special study during each school year will be limited in number and selected on their record of study. Through scholastic merit they will graduate from M.H.S. with their permanent record stamped “JOHN RYAN SCHOLAR”.

A Medina High School student may apply to belong to the John Ryan School of Historical Excellence if he or she:

A scholar may choose to compete for the John Ryan Scholarship, which is awarded to one senior scholar per years. This scholarship will be awarded based on a scholars level of involvement in the group and a written essay. The essays will be judged by a committee comprised of members of the Medina Sandstone Society and Medina High School History Department. The winning scholar will be given the title “20__ John Ryan Scholar of the Year” and awarded a scholarship upon graduation. The winner will be announced at the annual honors convocation. 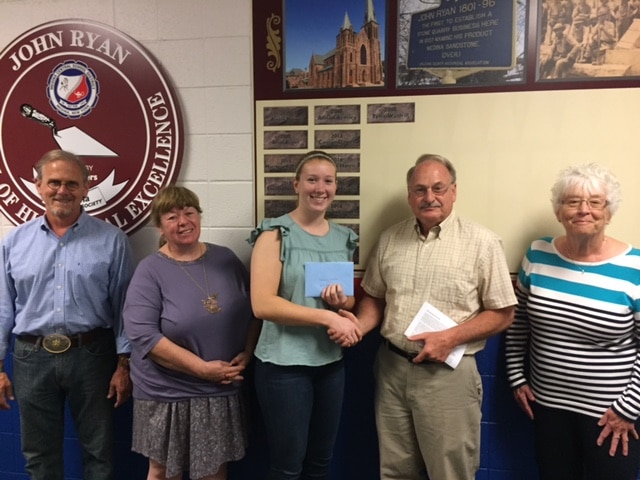